By sheer coincidence, my very first tutoring family were homeschoolers back in 2000 (www.homeschoolnyc.com).    Whatever this Fall may bring, students may be learning from home at least part of the time.  I will be sharing online resources  biweekly.
Please comment/share ideas on what has been helpful

Estimation 180 has photos for estimation: “tasks that make mathematical reasoning accessible to students and enjoyable.”

Visual Patterns asks visitors to “Click on a pattern to see a larger image and the answer to step 43. What is the equation?”

New York Times What’s Going on in This Graph? is a colorful ‘real-world’ Math resource sure to spark discussion (and even debate!) 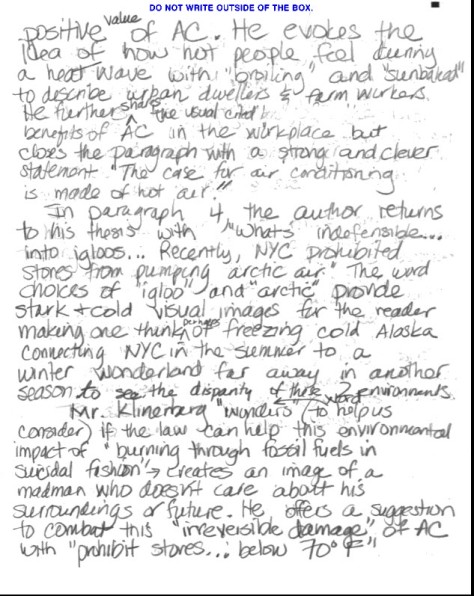 Here was the prompt:

As you read the passage below, consider how Eric Klinenberg uses

Adapted from Eric Klinenberg, “Viewpoint: Air-Conditioning Will Be the End of Us.” ©2013 by Time Inc. Originally published July 17, 2013.

Earlier this week, as the temperature in New York City hit the upper 90s and the heat index topped 100, my utility provider issued a heat alert and advised customers to use air-conditioning “wisely.” It was a nice, polite gesture but also an utterly ineffectual one. After all, despite our other green tendencies, most Americans still believe that the wise way to use air conditioners is to crank them up, cooling down every room in the house—or even better, relax in the cold blasts of a movie theater or shopping mall, where someone else pays the bills. Today Americans use twice as much energy for air-conditioning as we did 20 years ago, and more than the rest of the world’s nations combined. As a climate-change adaptation strategy, this is as dumb as it gets.

I’m hardly against air-conditioning. During heat waves, artificial cooling can save the lives of old, sick and frail people, and epidemiologists have shown that owning an AC unit is one of the strongest predictors of who survives during dangerously hot summer weeks. I’ve long advocated public-health programs that help truly vulnerable people, whether isolated elders in broiling urban apartments or farm workers who toil in sunbaked fields, by giving them easy access to air-conditioning.

I also recognize that air conditioners can enhance productivity in offices and make factories safer for workers who might otherwise wilt in searing temperatures. Used conservatively—say, to reduce indoor temperatures to the mid-70s in rooms that, because of shortsighted design, cannot be cooled by cross-ventilation from fans and windows—air conditioners may well generate enough benefits to balance the indisputable, irreversible damage they generate. But in most situations, the case for air-conditioning is made of hot air.

What’s indefensible is our habit of converting homes, offices and massive commercial outlets into igloos on summer days, regardless of how hot it is outdoors. Recently, New York City prohibited stores from pumping arctic air out onto the searing sidewalks in an attempt to lure customers while burning through fossil fuels in suicidal fashion. I can’t help but wonder whether cities like New York will ever prohibit stores from cooling their facilities below, say, 70°F. No doubt a law like that would raise even more objections than Mayor Michael Bloomberg’s attempt to ban big sodas, but it might well be necessary if we can’t turn down the dial on our own.

I’m skeptical that American businesses and consumers will reduce their use of air-conditioning without new rules and regulations, especially now that natural gas has helped bring down energy bills and the short-term costs of cranking the AC are relatively low. Part of the problem is that in recent decades, the fastest-growing U.S. cities—places like Las Vegas, Phoenix and Austin—have effectively been built on air-conditioning. (This is also true in the Middle East and Asia, and as a result, global energy consumption is soaring precisely when it needs to be lowered.) Throughout the country, most designs for new office, commercial and residential property rely entirely on AC, rather than on time-honored cooling technologies such as shading from trees and cross-ventilation from windows and fans. As a result, there is now an expectation that indoor air will be frigid on even the steamiest days everywhere from the Deep South to the Great West. What’s worse, this expectation is spreading to the nations where American culture carries influence; sales of air conditioners rose 20% in India and China last year.

Trying to engineer hot weather out of existence rather than adjust our culture of consumption for the age of climate change is one of our biggest environmental blind spots. If you can’t stand the heat, you should know that blasting the AC will ultimately make us all even hotter. Let’s put our air conditioners on ice before it’s too late.

Write an essay in which you explain how Eric Klinenberg builds an argument to persuade his audience that Americans need to greatly reduce their reliance on air-conditioning. In your essay, analyze how Klinenberg uses one or more of the features listed in the box above (or features of your own choice) to strengthen the logic and persuasiveness of his argument. Be sure that your analysis focuses on the most relevant features of the passage.

Your essay should not explain whether you agree with Klinenberg’s claims, but rather explain how Klinenberg builds an argument to persuade his audience.

Scores for the May 7 new SAT will be released tomorrow!!
I studied a lot especially on Khan Academy and am eagerly awaiting results which will be posted on College Board tomorrow June 15…stay tuned… 🙂