Q: By adding two straight lines,create 10 triangles inside the star above.

thank you to Adam Schwartz for the picture at the bottom

Q: Can you take the clock face below, and cut it into four pieces such that the numerals on each part add up to the same number? 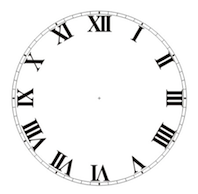 Q: Here is the Math/logic brain teaser that took the Internet by storm in mid-April 2015:

Cheryl then tells Albert and Bernard separately the month and the day of her birthday respectively. Albert: I don’t know when Cheryl’s birthday is, but I know that Bernard does not know too.

Bernard: At first I don’t know when Cheryl’s birthday is, but I know now.

Albert: Then I also know when Cheryl’s birthday is.

So when is Cheryl’s birthday?

A: July 16th.
Can’t be a unique day. Therefore it cannot be May or June.

Has to be unique

If Bernard know and Albert now knows that it has to be July 16th. If it was August then Albert would not know.

(Thanks to Adam Schwartz for this solution!)

Q: If a grandfather clock takes five seconds to strike 6 o’clock, how many seconds will it take to strike 12 o’clock?

Eleven. It will always be one second short of whatever the o’clock since the time doesn’t start until the first strike.

My Tweets
Join 1,060 other followers

Working with a student on 1/3 of 36.
Details details details
Summer #math
shades at @aloftlexingtonma
#math in the real world 🌎
😎🔢✏♾